roni said:
It's obviously that way.
I know for sure, that this photo was shot by Allen Ginsberg.
Click to expand...

Going back years here.... I looked and it seems that this WSB photo is by Malanga, not Ginsberg. I can find no attribution to A.G. at all. Maybe it just looks the same. He does have archives of some other photographers, but not Ginsberg.

bospress.net said:
Anyone know if that is to bleed the radiator? Do they even have radiators in LA?
Click to expand...

Not steam radiators like you'd have out there or in the Midwest. Mostly electric wall heaters here, especially in apartments (that must be his Mariposa apartment). That does look like a valve though, or maybe a cheap pipe repair. A hot water pipe. Where the plumbers at? Chime in! Ha.

I'm no plumber, but that looks like a water pipe, not a steam pipe. Water pipes are fairly narrow (~3/4") to maintain pressure in the system whereas steam pipes for radiators are much more wide (~1.5-2") because the steam essentially pressurizes the system through the act of becoming steam. That looks like a repair that needs a calendar over it. :rolleyes:

That's a great large and sharp photo of Buk.

bospress.net said:
this WSB photo is by Malanga, not Ginsberg
Click to expand...

You're right, I was wrong.

I was thinking I'd remember the photo from this book (which would have made it a Ginsberg-shot):

But I just went through the book and the pic isn't there.
My bad. Sorry Mr. Malanga.

Founding member
Are those actual Levi's rather than his typical jeans from Sears? Hell hath surely frozen over. Moderator
I haven't seen this one before: You're looking at it courtesy of this thread.

Bukowski at the premier for Barfly at the AMC Theatre in Century City. This doesn't fit exactly with his recollection in the novel Hollywood (Chapter 44, pages 220-224), which I think it was one of the more entertaining parts of the novel, but here he is with wine in hand. Founding member
The German MaroVerlag posted this one on Facebook Moderator
Who could have thought that FB would turn useful...

Founding member
Fixed that for you. Cool, never seen that, nor this one, also on Maro Verlag, though perhaps posted elsewhere here...

I like both old & young. The pics of him older remind me of my grandfather in good & bad ways...a lot.


mjp said:
Previously unknown picture of the side of Bukowski's head, 1987.

Taken the same day as the Penn/Madonna pic in the photos section of the site.
Click to expand...

I read somewhere that Joe Henry the musician grew up & went to high school with Madonna. That's how he met his future wife, M's sister...anyway. They, Joe & Madonna, turned eachother on to Buk's work back in the 70's apparently. So she more than knew who Buk was & is/was a fan.
Last edited by a moderator: Oct 22, 2015

Johannes said:
That's quite some garden, btw.
Click to expand...

It's a miraculous one: the old man got a full wheelbarrow of apples out of that pumpkin patch (?!?) :confused:

I thought the caption said mandarines..

Moderator
Whatever. Still not pumpkins (in full size.)

These WERE mandarines indeed.

The story in short is, that Buk had a biiig bunch of those from the trees in his garden, filling up to two huge trash-cans (AFTER Linda took to the 'Dewdrop-Inn' as much as she could use as long as they were good). The time was March 1980.

He didn't know what to do with them and Benno Käsmayr, who was up for a visit at the time, suggested to simply bury them. That's the process we see in the picture as well as in the following one: The guy helping Bukowski in the pic is not Benno, but Rainer Wehlen, the translator of the German edition of 'Shakespeare Never Did This'.

(I'm sorry, I can't find those pics in color right now. They must be on a very old hard-drive or CD-R/DVD-R, since it's over 10 years ago, when Benno sent me the original photographs to scan them. The reason I easily found it in b/w is, that I've published this one in our yearbook of 2004 (p.58) along with the background-story written by Benno himself.)
Last edited: Oct 28, 2015

I love how old guys from that generation always wore buttoned-down shirts and slacks, even when gardening.

Good catch My grandfather was the same way -- he even wore dress shoes. I think they just saved their old dress clothes for yard work. My dad still wears his old dress shirts when has to spray stuff, paint, or handle brush.

Does anyone recognize/have quick and easy access to a photo:

I think Buk is sitting at his typer, and on the wall next to him is his shelf overflowing with published little mags, zines, etc?

Is it even real? I'm convinced I remember seeing it once (but maybe I imagined it)...

Founding member
It's real. The shelf is bending under the weight of what's on it, yeah? Don't remember where it is though. Neeli, Linda and Bukowski at the Edgewater House
Just caught this on FB

Founding member
That's one of the prints that Cherry's son (I think) was selling a few years ago.

Moderator
Here is the bigger version of the same photo (from Amazon): 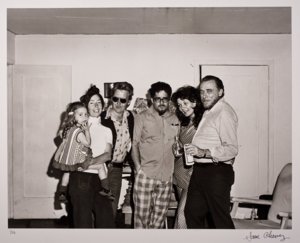 Yeah I know it looks smaller than BS's photo, but it's a thumbnail: you have to click on it (and on an arrow, and on a magnifying glass with + on it) to get the original size.
Last edited: Jan 15, 2016

I have one poster from that shooting.
Will look it up and post.

I was sort of wrong: though the poster that I have is from that shooting, it isn't a different motif (as I had thought).

Mine also has a note by Linda King and on the back are signatures by Neeli and Sam Cherry.