Am I really the first person to post anything about this?

"The Bell Tolls for No One is a book of previously uncollected short fiction by everyone's favorite dirty old man, Charles Bukowski. Beginning with the illustrated, unpublished 1947 story, 'A Kind, Understanding Face,' continuing through his famous underground newspaper column, 'Notes of a Dirty Old Man,' and concluding with his hardboiled contributions to 1980s glossy adult magazines, The Bells Tolls for No One encompasses the entire range of Bukowski's talent as a short story writer, from straight-up genre stories to postmodern blurring of the line between fact and fiction. Designed not only for Bukowski fans, but also for readers new to his work, the book contains an informative introduction by editor David Stephen Calonne that provides historical context for these seemingly scandalous and chaotic tales, revealing the hidden hand of the master at the top of his form. Also included are several of Bukwoski's own illustrations."

Reaper Crew
Moderator
Am I the first person to notice (& care about) this (?):

I reckon you'd like to correct that (here and at Amazon).

hasn't David already said something about it somewhere and even linked to the amazon? I'm pretty sure.
But it's nice to have a seperate thread for it now.
B

Either way, thanks for the heads up and the link conl.
C

Stumbled on it last night.
Didn't want to start a separate thread if there was already one going, but couldn't find anything when I searched the site for the title.

Founding member
I'm not sure it's been publicly mentioned here before. But with this and Abel's poetry collection, there's going to be a lot of activity next summer.

Yes, I haven't mentioned it since it's not due out until next summer, but here is the cover--took a while to get permission from Robert Crumb.... @conl First I'd heard of it anyways, so thanks for the post. I'm always the last one to the dinner table, haha!
C

Is the other one that's coming out poetry or letters?

A series of poetry books containing thematically-related poems was the last description I heard about Abel's forthcoming work.
C

Nice to know there' still a few things left in the vaults.

Yes, I haven't mentioned it since it's not due out until next summer, but here is the cover--took a while to get permission from Robert Crumb....
Click to expand...

I love that Buk drawing by Crumb and the layout of the book cover. Great colors too.

latest news to me was, that the upcoming 4 books by Abel won't be totally even. Some of them will have not only poetry but also letters or prose etc.

Founding member
That sounds like a good move. At least it would provide a break in a thematic collection.

I know it's already a done deal, but to me, the whole thematic thing...I don't know. What it says to me is that Ecco doesn't have any faith in a regular collection, or doesn't know how to market another regular collection. It's certainly easier from a marketing perspective to have a "hook" like a theme to exploit promote. But does it make for a better book?

Raise your hand if you are eagerly awaiting 250 pages of horse racing poems.

Not that there is actually going to be a collection of horse racing poems (please god), just pointing out where going thematic with Bukowski could go horribly off the rails.

mjp said:
Raise your hand if you are eagerly awaiting 250 pages of horse racing poems.
Click to expand... What's the difference between a Sweathog and a Scientologist?

There is one thing a book on horse racing would do though...make a book on cats seem interesting.

Not to harp on the thematic thing again (I'm pretty sure I said I wouldn't), but if you had to boil Bukowski's work down to four themes, you could make an argument that horse racing could be one of them (I'd say it ranks closer to 8th or 9th in a list of common themes, but what do I know). But I don't think such an argument could be made for cats.

It would be interesting to come up with a list of 10 or 12 themes and tag the poems in the database. But it would also be a very long project and a lot of work for little reason.

Which, you know, has never stopped us before.

How about a theme "On dogs".
Chapters on
- a doggish live
- the dog-eat-dog world
- women B did doggy-style ..

David said:
Yes, I haven't mentioned it since it's not due out until next summer, but here is the cover--took a while to get permission from Robert Crumb....
Click to expand...

Am in Germany now and just checked Amazon and it appears this baby is now up and running...

They'll even deliver tomorrow if you really can't wait.

Founding member
It showed up in the mail today, imagine that. City Lights always comes through.

It's a small format: 4.25 x 7 inches, which makes it smaller than More Notes of a Dirty Old Man (which was smaller than Absence of the Hero and Portions from a Wine-Stained Notebook, both of which were the old standard size of 6 x 9 inches). But as long as the books are good - and the City Lights books are always good - they can keep hitting them with the shrink ray. Though I think we're about as small as you can go with this one.

More on contents later, no time to read right now.

Here are the press sheets that came with it. 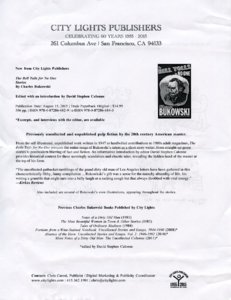 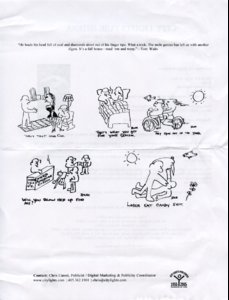 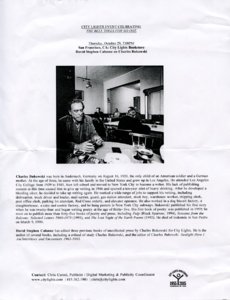 mjp said:
It's a small format: 4.25 x 7 inches, which makes it smaller than More Notes of a Dirty Old Man
Click to expand...

I can hardly wait.

Fits in a pocket. I wonder if the illustrations are full-page.

Founding member
They are not. There aren't a lot of them anyway, maybe a dozen at the most. 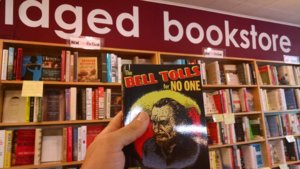 Sounds like Abel DeBritos collection will be here in no time too. #newbukheaven

Didn't plan to buy it so soon, but the hype was unbearable.

It arrived today. The small size is a bit disappointing. I was hoping for something sized more like Notes or More Notes, but it is the content that matters (if I can still read the small typeface). At a beefy 300 pages, there's no shortage on content.

Founding member
Yeah, it's right on the verge of requiring reading glasses, isn't it. ;)

Still, an embarrassment of riches with this and Abel's first collection tomorrow, then another in December. The last time three major Bukowski books full of new stuff were published in a four month span was...never.

Small, but I think still bigger than City Lights Pocket Poet series. I have a couple of those, and they're really well, pocket sized.

I ordered The Bells... and On Writing yesterday from amazon and noticed that after the one On Cats coming out indecember there´ll be one On Love coming out on February 2 next year. That's 4 Buk books within 6 months! Not bad at all for a dead writer. :D

plus:
this fall, the German publisher Maro will bring out a new book, containing all those poems from 'You Get So Alone' that weren't translated by Carl Weissner back in the 80s (CW had a habit of NEVER translating the whole books of poetry but only parts, roughly one half).
And next spring, Maro brings out said first part of the translation made by Carl Weissner, which has been out of print for many-a-years.

(so, both upcoming books together will be the entire 'You Get So Alone'. Never before in history, we had the German translation of one whole Bukowski-poetry-book! even though I dislike, that it'll be two seperate volumes)
Last edited: Jul 30, 2015

roni said:
CW had a habit of NEVER translating the whole books of poetry but only parts, roughly one half
Click to expand...

roni said:
Never before in history, we had the German translation of one whole Bukowski-poetry-book
Click to expand...

With the exception of Dangling in the Tournefortia, where only one single poem had been dropped: There are hecklers in Germany too.

you're right. I forgot that one.
And this one, too, was split into two volumes, dammit.

roni said:
this fall, the German publisher Maro will bring out a new book, containing all those poems from 'You Get So Alone' that weren't translated by Carl Weissner back in the 80s
Click to expand...

Who's the translator of those poems?

One Esther Breger.
I've flipped through the unlectored, uncorrected version and it's fair enough. By now it's been lectored by Rainer Wehlen (German translator of 'Shakespeare Never Did This').

With the exception of Dangling in the Tournefortia, where only one single poem had been dropped: There are hecklers in Germany too.
Click to expand...

Funny, that a German translator dropped the poem about the German hecklers. Maybe he did´nt like it for some reason?

(CW had a habit of NEVER translating the whole books of poetry but only parts, roughly one half).
Click to expand...

That's a shame! I wonder why they only translated about half of each poetry book?
Still, at least you got a lot of Buk poems in German. In Denmark we only got a thin anthology, a few poems from each poetry collection and the translation is fucked up in some places.

Bukfan said:
Funny, that a German translator dropped the poem about the German hecklers. Maybe he did´nt like it for some reason?
Click to expand...

You speculated on the reasons eight months ago in another thread:

Bukfan said:
Funny, the heckler poem was omitted in the German translation. I suspect they were afraid of offending the Germans (the same thing happened with a Disney Donald Duck DVD a few years ago. The old WW II cartoons making fun of Hitler and Mussolini were omitted from the European version of the DVD out of fear of offending the Germans and the Italians).
Dec 2, 2014
Click to expand...

You speculated on the reasons eight months ago in another thread:
Click to expand...

Right, and I´m still wondering what the reason was.

New poetry collection: "Storm for the Living and the Dead"
2 3