A good old one, allways loved this song.

Founding member
finally found the prince version. and this is hilarious if true -

"It was rumoured by various writers that after Prince listened to the band's 1984 debut album All Over the Place, he gave the song to Bangles rhythm guitarist Susanna Hoffs, so that in return she would sleep with him"

and never saw any of this rehearsal footage -

d gray said:
he gave the song to Bangles rhythm guitarist Susanna Hoffs, so that in return she would sleep with him.
Click to expand...

That rehearsal footage has been around for a while. There are hours of it. Prince was a lot of things, but lazy wasn't one of them.

"come up and see my etchings" but it never worked so apparently not.

This week I was at a folk fest in Vancouver BC and this is my ‘coup de coeur’. Her name is Irish Mythen, a tiny Irish woman who now lives in PEI Canada. She can play and she sure can sing. She writes political songs but this Van Morrison made me cry. 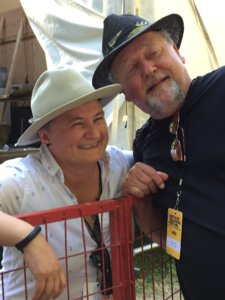 Founding member
god i had a horrible acid trip involving that zeppelin song.

and neil young has some of the strangest tunes...

Your Host
Moderator
Founding member
That's pretty good. It's one of those records that a lot of people rave about just because Lee Perry produced it, but to me it's just kind of everyday 1977 era reggae. Which is a good thing, and a time that can't be repeated (well, no time can be repeated, can it?), but the songs are just kind of okay.

That's the original Perry mix in that video, which no one really heard until a 40th anniversary version came out a couple years ago. Before that the original mix was only available on the first 200 copies of the album that were pressed. Which made it, you know, slightly difficult to put your hands on a copy.

and in additional Replacements related news, it's Slim aka Bob Dunlap's born day

Went through the whole post in a couple of hours... quite a ride.

d gray said:
you ever seen what a RUSH audience looks like?

All white all guys all wearing Yes T shirts-except for the cool ones like me and my social distortion T! And for the record Rush played my high school and blew us the fuck away. They were so so good.